One day you wake up as you do every morning, and you realize that you have reached a breaking point.  There is no huge event that drives you over the precipice.  In fact, you realize it has been a long, slow process -- too much stress, no emotional support, financial struggles, too much work and responsibility, and too little fun.

And, you feel guilty, because your life isn't as bad as many peoples' lives -- there could be so many more serious problems.  And this guilt makes you feel worse.

Suddenly, though, you realize you are just empty -- there are no emotional reserves left.  The huge bill for car repairs that you can't afford, a few careless, hurtful words spoken, and then finally a late school bus which throws off your tight morning schedule -- you feel the tears prickling at the back of your eyes.

But, you don't let them fall -- you can't, because you aren't really sure if you can ever make them stop.

And then, the day is over, you pick up your car at the garage, drive home to your peaceful house, pour a glass of wine and enjoy the blissful pleasure of a quiet Friday evening.  On Saturday, you spend the afternoon with your favorite cousin, touring apartments and condos in lovely Saratoga County -- a lazy afternoon filled with good conversation and laughter.  You find that the last apartment on your tour is on the sixth floor of Market Center Apartments in Saratoga Springs -- and you enjoy the panoramic view from its huge windows and walk out onto the lovely balcony which overlooks beautiful downtown Saratoga and mountain vistas beyond, with cool autumn breezes and blue skies begging you to linger there for awhile.

The emptiness of yesterday morning is slowly being refilled with the joy and beauty of this lovely afternoon, and you realize that you are not going to fall over the precipice.  You were born with the gift of a happy spirit, and you just have to be sure you take the time to refill the springs every once in awhile -- to spend time with people who make you happy and visit places that bring you pleasure.  You are going to be okay!!

Posted by Unknown at 9:25 PM No comments: 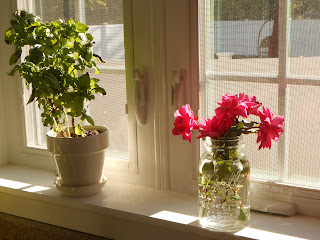 Each weekday morning I rise early, walk slowly down the stairs and begin to feel the stiffness in my muscles ease as I start the coffee pot and open the door to my lovely porch -- the sunrise filters through the branches of the old white pines and reflects on the windows I open to let in the fresh autumn air.  As the coffee brews, I watch the birds at the feeder and sometimes see a deer or two passing through in search of an early morning meal.  The quiet of these autumn mornings is such a contrast to the lively birdsong of spring.  I love this old house, with its familiar coziness, and long to linger on the porch for a bit, but school has begun and my daughter-in-law is back to work, so I must hurry down to take care of my grandchildren.

As I walk through the door of their house, I am greeted by the precious little faces I love so much.  I begin the familiar morning routine to get them ready for the day ahead.  During scattered moments, I pause to savor the beauty of my son's house -- so new and pristine and different from my own home.  My favorite spot is their kitchen with its sunlit mullioned windows and French door leading to the lovely deck my son designed and built.  This morning the windowsill holds an old Ball canning jar brimming with roses and a pot of basil, whose scent lingers on my fingers as I touch the leaves.  Sunlight falls on the jar of roses, and I am thankful for this moment.

For a woman of 62, taking care of preschoolers is a tiring and demanding job.  In the midst of temper tantrums and diaper changes I remind myself that I have chosen this life so that my grandchildren will know daily security and love while their parents work.  I have the time to listen to their questions and give thoughtful answers; the bond between us is strong.

Perhaps, though, it would have been a wiser choice to take a job in the real world after our business collapsed last year.  Perhaps I wouldn't be struggling to make ends meet.  Sometimes I so much miss dinner out and buying sprees at the book store.  But, this morning as I savor the beauty of a jar of roses in the sunlight and look forward to a leisurely walk through the neighborhood later -- enjoying a couple of beautiful cottage gardens along the way -- I know my spirit was not meant to be contained in an airless office.  My spirit needs to be free; it needs to be one with nature, and it needs time to reflect upon and enjoy the world around me.  I may be lacking in material wealth, but I am so rich in spirit!

The Politics of Intolerance 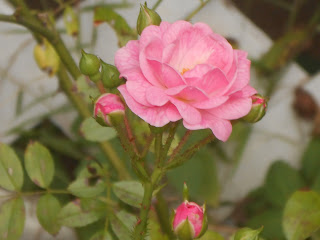 A perfect rose on a September morning -- how lovely.  As I water and tend my plants and flowers, I am in a peaceful world of my own; how I wish life were as simple as moments like this in the garden.  Unfortunately, life is far from simple.

As we navigate through this election year I am reminded again and again of the complications we face in choosing the best candidates -- we are bombarded with a constant deluge of words, many of which are harsh and often untrue.  It is imperative that we listen and read carefully these words, so we can make the most educated decisions on those whom we choose to lead our communities and our nation.

In the past few elections, though, I have become alarmed at the vitriolic tenor of the public, the media, and the candidates themselves.  There is no spirit of compromise.  There seems to be no willingness to listen or consider the beliefs or the ideals of  the "other side."  Even though I feel very strongly about certain issues, I force myself to read and understand opposing views.

I find it increasingly upsetting, though, as I read many Facebook comments and numerous blogs.  I notice a growing intolerance in this country -- and maybe it has always been there, but has been better hidden when people did not have access to social media to espouse their inner hatred and racism.  Huge segments of our society are filled with anger that their tax dollars go to support "worthless" folks on welfare.  While many of them do not support raising the minimum wage, they still do not want their tax dollars paying for health care for these same "worthless" working poor who cannot afford large health insurance premiums.  They look askance at Disability because too many people who could be working collect disability instead.  And who are they to judge who is physically able to be working?  They worry about all the people who are collecting unemployment, but working on the side as well.  They worry on one hand that all the illegal immigrants are taking good jobs from real Americans, or, conversely, that these "worthless" immigrants are not working and are receiving free medical care and food stamps.  And what is the alternative for these "worthless" people -- what happens to them if they are unable to work, or unable to  find jobs in this difficult economy?

And yet, these same Americans (mainly Republicans) do not worry about their tax dollars supporting banks and corporations that make billions of dollars, outsource jobs and take advantage of huge tax loopholes and deductions, or wealthy people and corporations who rely on offshore addresses to avoid the taxes they legitimately owe to the United States.

I read a comment yesterday from one man who said almost 50% of Americans are on some sort of government welfare.  As I fact-checked his statement, I noticed one Christian news article that made this same statement -- but the 50% figure also included people currently collecting Social Security, Medicare, and Unemployment, all programs that are funded through worker and employer contributions.

I hear extremely nasty comments about African-Americans and Arab-American, Mexican-American and Indian/Pakistani-American immigrants etc., etc.  I cannot understand -- unless we are Native Americans, we are all descendants of immigrants to this nation.  What if our ancestors had been denied equal opportunity to build a life in this country.  I have English, Dutch, German, French, and possibly Irish blood in my veins -- how am I "better than" these newer immigrants???  And, how many wonderful contributions have been made to our society by all of these people!?

I am frustrated and disillusioned -- and, even more difficult to understand, is the fact that many of these angry, bigoted people call themselves Christians.  As a life-long Christian, verses from Matthew 25:35-40 have been the strongest influence on my adult life:

"Come, blessed of my Father, into the Kingdom prepared for you from the founding of the world.  For I was hungry and you fed me; I was thirsty and you gave me water; I was a stranger and you invited me into your homes, naked and you clothed me; sick and in prison and you visited me."  Then these righteous ones will reply, "Sir, when did we ever see you hungry and feed you?  Or thirsty and give you anything to drink?  Or a stranger, and help you?  Or naked, and clothe you?  When did we ever see you sick or in prison, and visit you?  And I, the King, will tell them, "When you did it to these my brothers you were doing it for me."

Posted by Unknown at 7:40 PM No comments: